well, after “mining data” for about 2 months, I found some interesting patterns that do relate and may provide a solution.

it’s clear at this point that the main factor for the blood pressure is STRESS, which brings a problem in itself, as in a country where everyone is pretty much asleep 24/7 this isn’t really “a thing” so a doctor will guess on things like this last, just because of how things are. additionally, it’s not “just stress” it seems to be some specific type (more on that later)

first, what I have found out so far
(in the order I was told by the doctor and generally people around me)

tiny or small impact.
I tested this by not smoking for serval hours after going out of bed, which should have lowered the overall nicotine levels already)
there was a tiny average impact (+/- 4 mmHg) however there may be other factors in play since this change was much smaller than the average fluctuation in measurements.

Interesting outcome (definitely some meaningful impact)
there seems to be somewhat of a short-term impact, I noticed every time playing VR, even with the pulse much higher of the resulting exercise,
the blood pressure itself was always lower than when started, additionally, last weekend went out with some friends to fly some drones, I did bring the device with me and measured even in somewhat stressful situations,
the pressure seemed down as well (not down as in normal but in the 130 range)

overall well-being sure resulting in less stress and has a lower pressure as an effect.
My average sleep time is around 6.5 hours, and with the data gathered, this is NOT ENOUGH!
every time i did sleep between 8 – 8.5 Hours, the general feeling during the day is much better.
however, there may be some conflict in the data, as i do generally feel tired resulting of the general stress almost all the time, this needs some more investigation.

MAJOR IMPACT!!
in my own conclusion, Stress is the key factor, however, there is no real Baseline, it seems this is far more affecting on a psychological rather a physical level.

Trading Related.
while writing this, my blood pressure raised to 162/110 while i have a Forex position that is well in profit but still holds a 0.05% exposure to the capital.
nothing really to be worried about, yet the numbers show a different picture.

Below is a chart outlining my trading positions in relation to the blood pressure and the weekends, it show’s very clear that the actual Financial exposure, has little to do with how the stress is applied,
the correlation rather seems to be on the conviction itself and less about the financial outcome. this needs some more exploration! 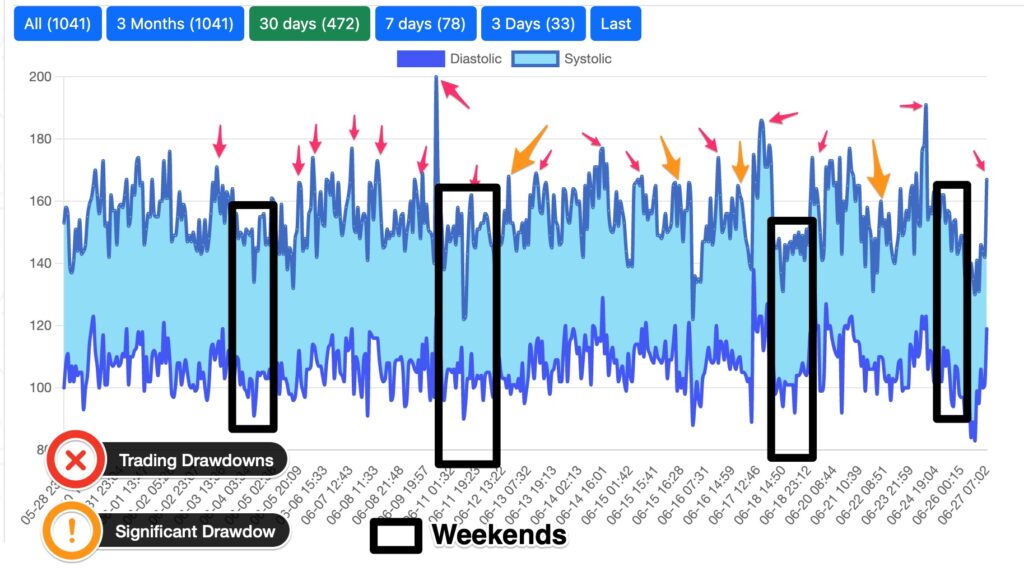 some (actually a lot) articles, Doctors’ advice, and general consensus about this topic suggest a “check” every few weeks/months or even yearly.
however, my pressure does fluctuate massively, this does beg the question:

Will ask this on Reddit, let’s see what other people’s opinion is about this.